The First Museum Exhibition of Brazilian Modernist Photography Outside Brazil

Tucked apart from the maze of Modernist superstars on MoMAs fifth floor, Fotoclubismo: Brazilian Modernist Photography, 1946-1964 is easy to missbut it shouldnt be. This one-room exhibition comprises over 60 striking photographs taken by members of São Paulos Foto-Cine Clube Bandeirante (FCCB), a group of amateur photographers whose work was nonetheless at the vanguard of postwar modernism. If youre wondering why youve never heard of the FCCB, it is likely because Fotoclubismo is the first museum exhibition of Brazilian modernist photography outside of Brazil, as the press release states. This long-overdue acknowledgment of the FCCBs unforgettable achievements is a reminder that Modernism was not a uniquely European phenomenon; while the photographs in Fotoclubismo are clearly in dialogue with the greats of the Western avant-garde, they make their own contributions to the medium.
Fotoclubismo presents monographic displays by three artistsGeraldo de Barros, German Lorca, and Gertrudes Altschulas well as thematic sections inspired by the prompts from FCCBs own internal photo competitions. One of these themes, Solitude, examines the human in relation to Brazils rapidly urbanizing landscape. Rows of identical, minimalist apartment blocks dwarf a lone mans triumphant silhouette in Eduardo Salvatores image of the newly constructed Várzea do Carmo housing complex. The birds-eye curves of André Carneiros Rails (Trilhos), a highlight of the exhibition, recall André Kertészs shots of Washington Square Park or Alexander Rodchenkos views of Soviet streets. Carneiros perspective straddles the line between realism and geometric abstraction, as the depthless forms of railway lines and manhole covers are interrupted by shadowy human beings springing up from the pavement. In the nearby Light and Power (Luz e força) by Marcel Giró, the wires of the power lines resemble musical staffs and clefs, as metal power boxes are arranged like the keys on a keyboard. We can hear the city symphony in these works, the cacophony of a new era.
Just as European modernist movements ebbed and flowed with the political tides, so too did the FCCB, which flourished during a brief democratic period in Brazils history. Perhaps it was also this optimism in imagining a brighter future, similar to that of the early Soviets, which led to such artistic ambition. One of the more abstract photographs in the show, Geraldo de Barros Fotoforma, conjures up Laszlo Moholy-Nagys utopian imperative to free photography from its objective meaning, as de Barros reduces the image to its most elemental forms: light and shape. While de Barros went on to have a successful career as a painter, most of FCCBs members did not rely on art to make their livingthey worked as lawyers, accountants, engineers, biologists. This perceived lack of professionalism, combined with the periods lingering doubts as to whether photography was truly an art, likely contributed to the groups relative anonymity outside of Brazil.
Fotoclubismo demonstrates that, no matter how unforgettable certain artistic achievements may be, artwork can and will be forgotten if no one advocates for it. Take, for instance, another classic of the Brazilian avant-garde: Ozualdo Ribeiro Candeiass 1967 film The Margin. So seminal that an entire cinematic movement was named after it, The Margin was historically so hard to find thatup until June 2021it had almost never been seen in or outside of Brazil. (The Margin recently screened at UnionDocs in collaboration with Cinelimite and the Film-Makers Cooperative). Like the artists in Fotoclubismo, Candeias was not a professional filmmaker by trade; in fact, he was a truck driver, poorly situated to advance his art on an international stage. The Margin and the works of the FCCB thus experienced a similar fate: heralded during their time, they disappeared into archives, unseen for decades until they were unearthed by curators who were actively looking for the overlooked.
Given the Brazilian governments current negligence toward its cultural artifacts, this lack of exposure can turn catastrophic: on July 29, Cinemateca Brasileiras warehouse in São Paulohome to more than 250,000 Brazilian filmswas engulfed in flames after a disastrous lapse in government funding to maintain the facility. Without sufficient recognition and funds, historic works by international artists such as those in the FCCB will not be preserved; without preservation, they will be destroyed. Such realities loom in the background of Fotoclubismo. Where are the other works by these amateur photographers today? What is their future? What other masterpieces linger in precarious archives, undiscovered and uncirculated? The need for further research, and further institutional support, is urgent.
Fotoclubismo: Brazilian Modernist Photography, 1946-1964 continues at the Museum of Modern Art (11 West 53rd Street, New York, NY) until September 26. 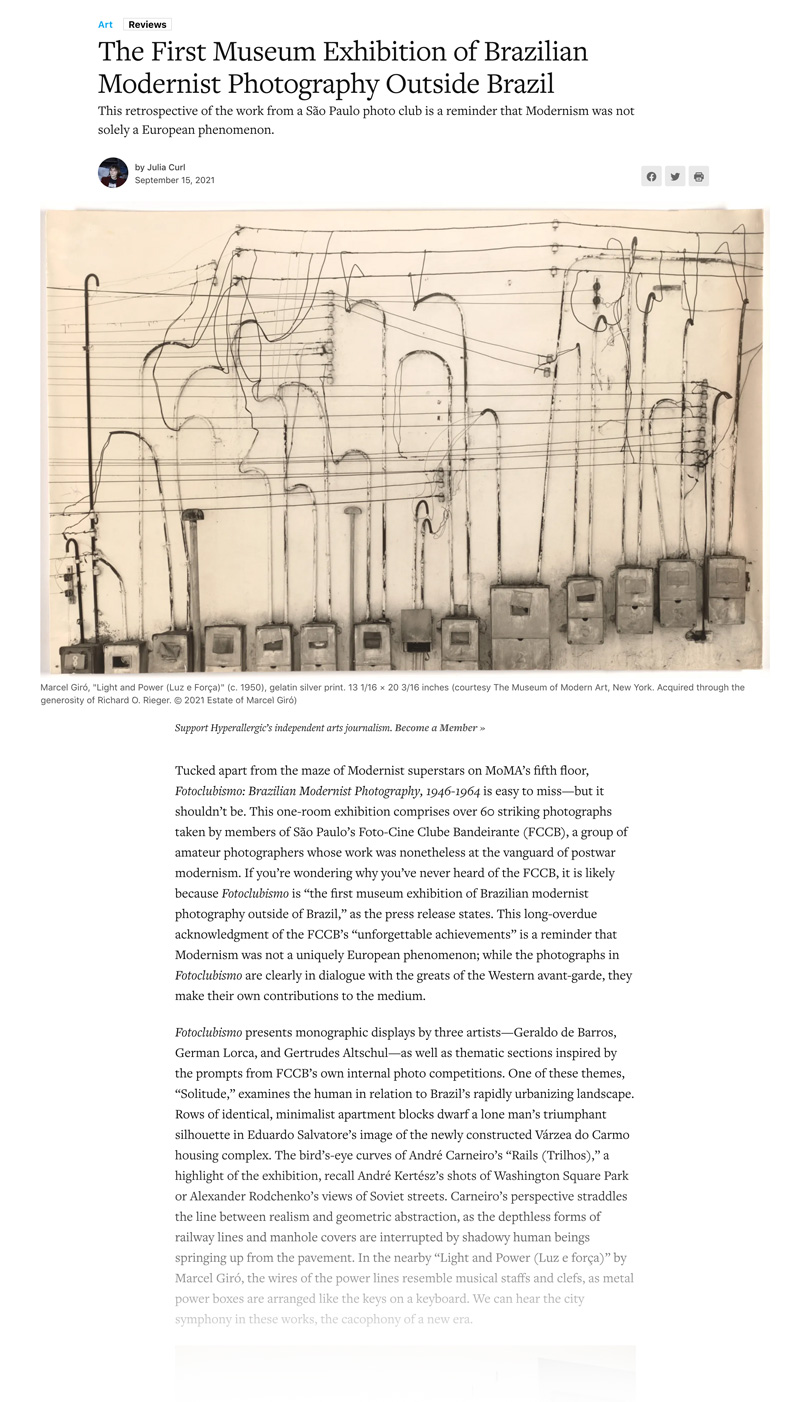