Palmira Puig: the discovery of a hidden photographer

A few months ago we spoke here of Marcel Giró, a Catalan photographer who had lived his professional career in Brazil and who had been rediscovered by his nephew Toni Ricart Giró, also a photographer and graphic designer. Thanks to his work, the RocioSantaCruz gallery presented a magnificent exhibition in which he recovered a sample of his work.

Now comes the second installment of this research task in which it has been discovered that Giró's wife, Palmira Puig, was, in addition to her main collaborator in the study they had opened in Sao Paulo more than twenty-five years ago, a excellent photographer with a work of smaller volume but also of great quality. Palmira Puig, daughter of a republican family of Tàrrega, married in 1942 with Giró, who had been exiled in the wake of the civil war, first in France and then in Colombia. And he did as he did at the time when the husbands were away: by proxy. The emotional family photo of the wedding day offers us a moving witness.

In Giró's work it was frequent the presence of Palmira as a model of his portraits or in the context of his travel photographs. But the work of the paper copies and above all the contact sheets of the photographer's file discovered in a good number of photographs the signature of Palmira as author. From this finding, the investigation is deepened and images are also discovered in which, in a distant plan, it appears in Giró, and therefore could not have been shot by himself. Thus, little by little, the personal work of our photographer has been recovered.

It has also been known that Palmira Puig was, in 1956, the first woman accepted as a member of the Foto Cine Clube Bandeirante of Sao Paulo, a photographic circle that represented the most avant-garde photographic current, clearly connected with the most advanced European photography of those years, and that he exhibited some of his photographs.

The Marcel-Palmira tandem worked well beyond collaboration in the management of the study. Normally Palmira signed exclusively with her last name, but in some occasions she did it adding her husband's: Palmira Puig-Giró. In some sheets of contact of the same reel often appear notes signed by Palmira so that it seems clear that they even shared the camera: a Hasselblad that can be seen exposed to the GaleriaSantaCruz, along with a large amount of material that illustrates this unique story that today does justice to the personality of Palmira.

The exhibition is distributed in different blocks. From the entrance and around the showcase with the camera, the objective and the photometer of the couple you can see a series of photographs of Palmira's youth, taken from family albums, which allow us to recover the environments of the thirty years in Tàrrega. Also of travel of the couple in Colombia in 1949 and in Brazil from 1947 to 1950. All a material that has made me think about how they can be from seventy years ago the samples that want to document our lives today. Will the digital files withstand the passage of time or will they fade into the ether of the clouds where they seem doomed to take refuge?

Below are a series of magnificent portraits that were made to each other, coexisting naturally in the roles of photographer and model.

The different contact sheets are also very interesting, where the frames that the photographers decided to posit are clearly drawn in a pen. Of the seventieth of photographs, most vintage prints in black and white, roughly half are from Giró, which in a certain way repeats exposure; many of them, portraits of his wife and collaborator that served him as a model.

As we move along the route of the exhibition, a series of photographs appear, both of Giró and Puig, which already go beyond personal portraits and concentrate on rural landscapes and small towns in Brazil at the beginning of the year. fifty. Like all the rest, it is a matter of throws obtained directly from the files of the two photographers who took them from Brazil to their return in Spain in 1978. At that time Palmyra became seriously ill and the couple decided to close their studio in Brazil and return in Spain . Unfortunately the photographer will die still very young, in 1978.

Finally, the exhibition concludes in the last room of the Gallery with a selection of photographs of four of the most outstanding members of the aforementioned Foto Cine Clube Bandeirante, of which our partner was part and which allow us to contrast the modernity of his compositions with a strong influence of the current of the new objectivity: objectual photography, fragmentation and a certain tendency to abstraction. Altogether, a small sample that brings us back to the photography of Marcel Giró and at the same time does justice to the photographic personality of Palmira Puig, muse and collaborator and at the same time with a remarkable photographic personality of her own. The exhibition can be visited until March 16 at the RocioSantaCruz Gallery. 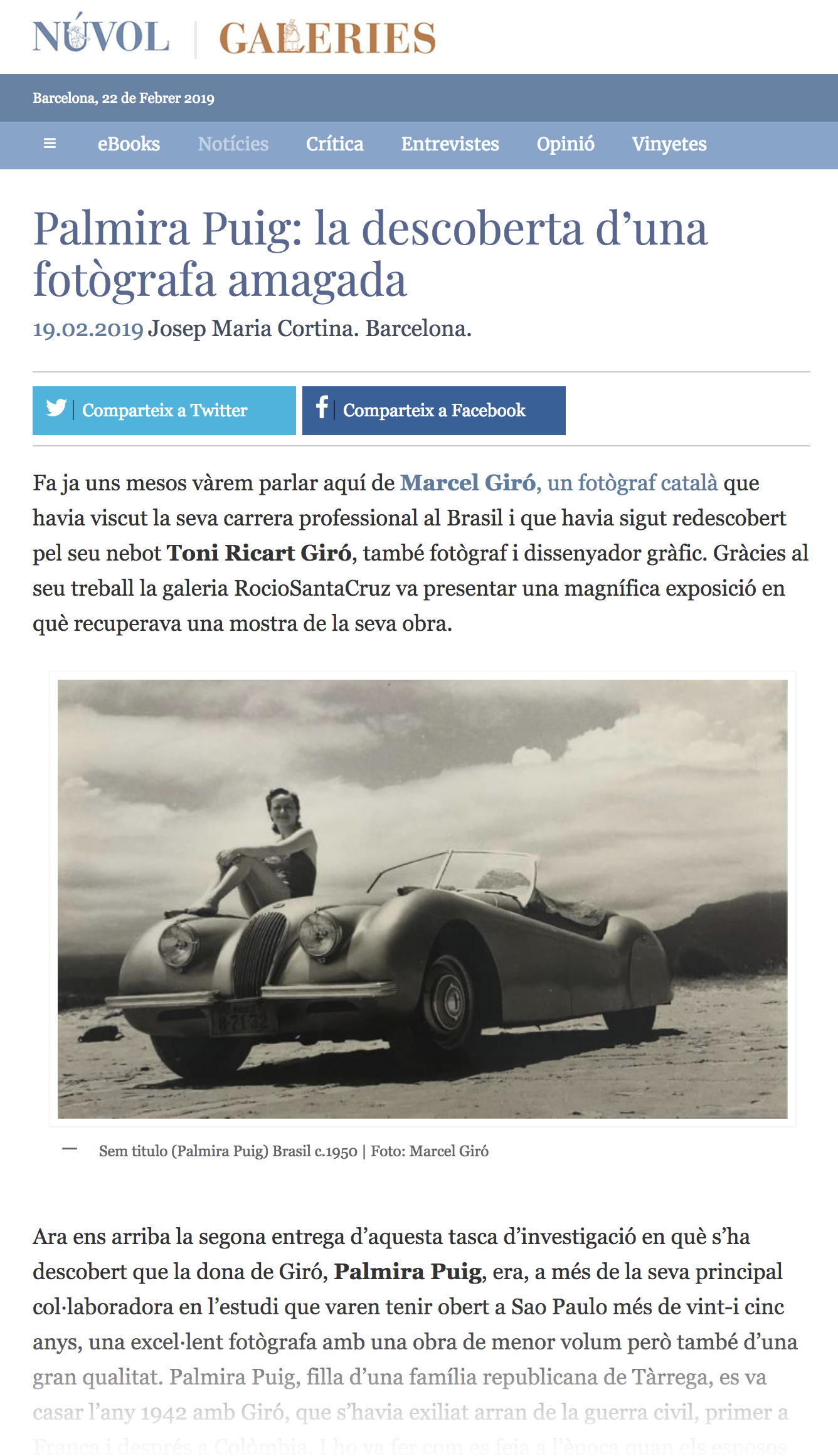