The discovery of Marcel Giró

Marcel Giró, born in Badalona in 1913 and died in Mirasol in 2011, is still a photographer almost unknown in his homeland despite the quality of his work, a sample of which is exhibited these days in the RocioSantaCruz gallery in Barcelona. The reason is undoubtedly due to the fact that he lived and worked professionally for many years in Brazil.

The vital trajectory of Giró has a certain adventurous air and a strongly enterprising character that he himself explained in a radio interview recorded years ago. He was the son of a Badalona based family that ran a small textile business that suffered the ravages of the civil war and was expropriated by the CNT. At the beginning of the war, Giró mobilizes as a volunteer of the Catalan Government but later, at twenty-three years, due to the convulsive situation and the clashes between the various republican factions, he decides to go into exile; he crosses the Pyrenees by foot and lives a few months in France doing all kinds of works to survive. In the year 1940 with two friends he leaves for Colombia where together they set up a small textile industry. A few years later, already married, he goes to Brazil where he had relatives and collaborates there in their business.

He keeps doing photography as an amateur until some of his photographs are acquired by an advertising agencie. He decides then to turn photography into his profession and establishes his own business. Estudio Giró, in a few years, would become one of the most important in the country and in which fourteen people came to work. But beside professional assignments, Giró always experiences in a more personal field and is linked to the most modern photographic trends of the country that revolve around the Foto Cine Clube Bandeirante of Sao Paulo. From this platform he contributes decisively to the consolidation of the most avant-garde photographic stream, clearly connected with European photography of those years.

Finally, the professional trajectory of Giró ends in 1978 when after the death of his wife he sells his business and returns to Catalonia.

Why this photographic heritage that had remained hidden is appearing now? With an excess of humility, Giró had always resisted the printed publication of his work that he considered to be diminished, due to two partial destructions caused by fires. For this reason, the discovery, if we can call it, is due to the work of his nephew Toni Ricart Giró, photographer, illustrator and graphic designer who explores and orders what remains of his uncle's work and shows us a real treasure. The result is a magnificent photo book published in 2012 and which has now been made a second edition, which can be acquired through the digital publisher Blurb and where we can discover the personality of a great photographer.

Little by little, the name of Giró is better known and some of his works are incorporated into collections of prestige such as MoMA in New York or MASP in Sao Paulo.

Now this exhibition is presented where most of the works are vintage copies. The show begins with a group of images from the thirties shooted in Catalonia in a rather pictorial style but where, from time to time, modern forms of composition are already guessed.

The bulk of the exhibition is made of works from the Brazilian stage, most of them dating back to the 1950s, although it was not possible, due to lack of information, to specify the year. Here, already decidedly, Giró has turned towards a radically different conception, influenced by the currents that inspired the New German objectivity.

A first block shows a series of images of very detailed fragments of plants and other objects, which in some cases begin to open the path of abstraction. A second block offers portraits of human figures where, based on cut frames or powerful blur, images of great power and originality are achieved.

Another group is made of architecture photography in which with a high contrasted black and white, where the grays have practically disappeared, Giró gets again very interesting images.

I have mentioned some of the photographs of the great photographer Antoni Arissa, who, in 2014, saw a great anthological exhibition in the CCCB of which we have already spoken in these pages.

Giró's photograph also recalls the works of other Catalan photographers of his time, such as Emili Godes or Joaquim Gomis, who, like him, made the transition from traditional photography to modernity.

Overall, this exhibition is a very good opportunity to recover the memory of another Catalan photographer from the second half of the last century that until now had passed almost unnoticed. 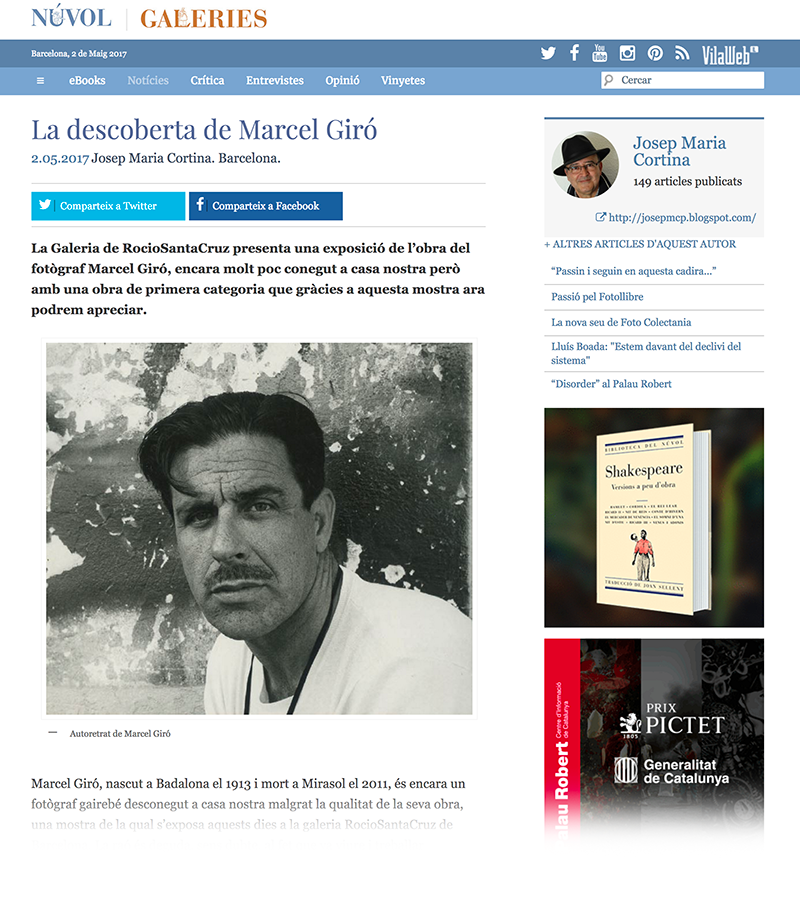