The break came at the end of the 1940s during an afternoon of intense debate at Foto Cine Clube Bandeirante (FCCB), in the city of Sâo Paulo (Brazil). Since it was founded in 1939 by a group of photographers colleagues among which were Gerardo Barros, German Lorca or José Oiticica, father of the well-known artist Hélio Oiticica, the FCCB was an experimental movement that pushed the visual arts to a modernity until then only attributed to the plastic arts. The aesthetic rupture superseded any idea associated with that pictorialist image that had so much presence in the artistic photography of the first decades of the century. One of those innovators, silenced until recently, was Palmira Puig-Giró (Tàrrega, 1912-Barcelona, ​​1978), who now recovers the Santa Cruz gallery with an exhibition, which will remain open until Saturday 16.

That group of photographers was a small revolution. They sought to be different, to become aware of the moment and to raise the camera's shot to the category of a unique, different and unrepeatable act. They used photography as their own language, using light, contrasts, geometry and new forms of architecture and industry.

There was a new place for photography, which ran very close to the decisive moment of Cartier-Bresson and other narratives that came from the Paulista School of Photography, the pioneer of the Brazilian modern photo. Bandeirante was a modern, open-minded club, although mostly of men. The few women who were part of him, before being photographers, were women of and muses. Maria Cecilia Agostinelli was from Julio and Menha S. Polacow from Jacob, editor of Foto Cine Boletín, whose covers used to illustrate Gertrudes Altschul. She was one of the first to enter the movement with Barbara Mors, the only Brazilian, and Dulce G. Carneiro, who alternated the Bandeirante with poetry clubs.

To that tiny group of women was united in 1956 the Catalan Palmira Puig-Giró. She also carried the surname of her husband, Marcel Giró, who soon signed the best modern advertising photograph in Brazil. In fact, Palmira inspired many of his most famous portraits, which came from a small studio that they managed together in Sâo Paulo. They shared ideals, objectives, camera and even reel, although not the same critical fortune.

That is why the exhibition that the Rocío Santa Cruz gallery in Barcelona dedicates now is so relevant, adding to that institutional rescue of many of the forgotten women of history. She is the first to look closely at the photographic legacy of Palmyra Puig taking distance from her husband, and not the other way around. In total it gathers about seventy images among vintage prints, contact sheets and reprints, and many of the ideas that make his photography a reference in the artistic field. There is the energy that he put at the moment of the photo. Also the position of the hands in the portraits, as well as the posture, the direction and the elegance.

But, above all, photography understood as an exercise in vision that opened the field of modern sensibility towards an exhaustive investigation of that abstraction emanating from the most common scenes: streets, houses, churches ... A reading of the generous world , like that of her husband, who also closed the lens of the camera when she passed away. Even in that they were measured.

It was in 1978, after leaving Brazil to settle in Barcelona, ​​where Rocío Santa Cruz came into contact with the legacy of both photographers and much of the unpublished material that has never been seen.

The first time she gave birth to the work of Palmira Puig-Giró was in Paris Photo in 2018. Two years before, the Museum of Art of Sâo Paulo (MASP) included one of her photographs in the exhibition that she dedicated to the Foto Cine Clube Bandeirante, whose women, except for Palmira, also had a place in one of the leading examples in the rewriting of recent art, Making Spaces: Women Artist and Postwar Abstraction, held at MoMA in 2017. A story with no outcome that has only just begun. 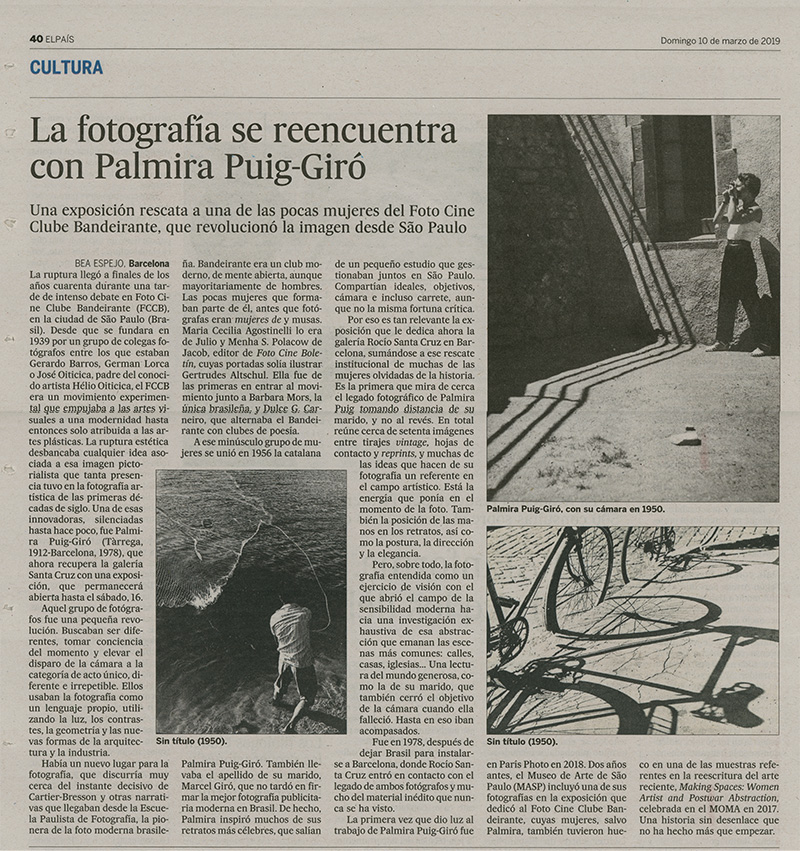