The Idea of Construction as a Metaphor of Modernity

Modern photography in Brazil was manifested through a wide range of different practices and approaches. Whether in photojournalism, in the photography of architecture, in photoclubs, in the production of photo documentaries, or even in fashion and advertising, what is observed are different ways of responding to a world in rapid transformation. The nine photographers featured in the show  Ademar Manarini, Eduardo Salvatore, Gaspar Gasparian, Geraldo de Barros, Gertrudes Altschul, Paulo Pires, Marcel Giró, Mario Fiori and Thomaz Farkas  were to a greater or lesser extent linked to the universe of the photoclubs and aimed to investigate the artistic potential of photography, free from the restraints of professionalism.

From different origins and backgrounds  some from families of immigrants  the photographers represented here produced their images under the impact of the process of modernization which, from the mid-1940s onward, reconfigured the look of the big cities in Brazil. In general, they resorted to photography as a tool able to  express the new ways of seeing and experiencing the entirely new urban context. These aims were materialized through direct photography but also through experiments such as photograms, montages and the Sabattier effect. While some limited themselves to exercises of a formalist character, others sought to enlarge the understanding of photography beyond the characteristic repertoire of the photoclub and what was conventionally known as the province of photography.

Individual differences aside, it seems that the idea of construction runs as a common thread through all the images presented here. The verb to construct, as explained by the dictionaries, is synonymous with building, erecting and architecting. These actions are materialized in different ways in these photographs, which sometimes result from a rigorous gaze on the world, and sometimes spring from a creative clashing with the material, by way of manipulations. Not by chance, photography and architecture were manifestations of modernism in perfect tune with each other in Brazil in the period following World War II. Building new architectural forms and constructing a new photographic language shared in the same ideal of constructing a modern country, as is evident in the photo Canteiro de obras [Construction Site], which Thomaz Farkas produced during the construction of Brasília, in 1958.

A little more than sixty years later, this exhibition presents modern Brazilian photography from the viewpoint of the photoclub, in dialogue with the beautiful space designed by architect Rino Levi in the late 1950s, officially declared a municipal and state heritage site of São Paulo. If the power of this encounter recalls a special moment in the countrys history, it also reveals that our enchantment with these images is in large part due to how they hold the potentials of a promised future. Today, however, perhaps more than ever, they give us a strange feeling of nostalgia for what we did not manage to become.

Gathered for the first time in a modernist house in São Paulo  the Castor Delgado Perez residence, designed by Rino Levi and headquarters of Luciana Brito Galeria, will be an expressive set of photographs by Geraldo de Barros, Gertrudes Altschul, Thomaz Farkas, Ademar Manarini, Paulo Pires, Marcel Giró, Gaspar Gasparian, Eduardo Salvatore and Mario Fiori. These names are representative of modern Brazilian photography, a language that has radically shifted the concept of art in the universe of photography and visual arts. Presented in partnership with Isabel Amado, the exhibition Modern Photography 1940  1960 opens on June 29th and can be seen until August 25th.

Given the growing interest on this period of Brazilian photographic production over the last decade, Modern Photography 1940  1960 proposes, with its more than 90 pieces, to gather unseen works and images that have not been intensely exhibited and that, therefore, are not broadly known by the public. Highlighting Geraldo de Barros, a precursor of Concrete art in Brazil and cofounder of the Ruptura Group, and Gertrudes Altschul, one of the few women to have the relevance of her production acknowledged during the time, the show intends to contribute to broadening the visual repertoire that has been built around these artists.

Modern photography in Brazil has united the desire for inventiveness and subjective interpretation of the world in the post-war context to the specificities of the industrialization and urbanization movements in the country. Propelled by the foundation of Fotocineclube [Cine-photo club] Bandeirantes, in 1939, the national photography scene has observed a unique effervescence from the 1940s onwards, when its representatives stepped away from the academic Pictorialism and opened up a discussion about the essence of the making of photography and its autonomy as an art form by itself.

It is precisely the path taken in pursuit of this new aesthetic capable of granting photography its status as art that can be seen in Modern Photography 1940  1960. On one hand, this investigation consisted in the abandonment of classic themes for an interest in abstraction, shadow and light contrasts, cosmopolitan scenes and the rupture with the rules of perspective and composition. On a complementary level, these photographers have inaugurated a visuality marked by the investigation of technical resources inherent to the media by means of laboratorial experiences and direct interventions in the photographic process, such as: the multiple exposure or cutouts of a same plate; the realization of photograms (when objects were placed directly under the enlarger, generating photographs without the mediation of a camera); overlays and drawings executed directly on the negative.

To present the autonomy of the body of work of each participating artist  whose pieces are included in the collections of high-profile institutions, such as MoMA and TATE Modern  without overseeing their possible dialogs and connections, the exhibition Modern Photography 1940  1960 is divided in two moments. While the Rino Levi Room at Luciana Brito Galeria is occupied with vintage photos traditionally exhibited and grouped by author, the Annex shows contemporary editions, reunited by affinities of subjects, languages and themes.

Thus, for example, some of Geraldo de Barros most famous Fotoformas can be seen next to enlargements of drawings on negative with tip-dry and China ink, or yet, Thomaz Farkas façades that are borderline abstract are accompanied not only by his documentary work, but also by Surrealist experimentations. Similarly, composition studies, vintage still lifes and contemporary prints of architectonic studies represent the broad range of Gertrudes Altschuls body of work in the show. 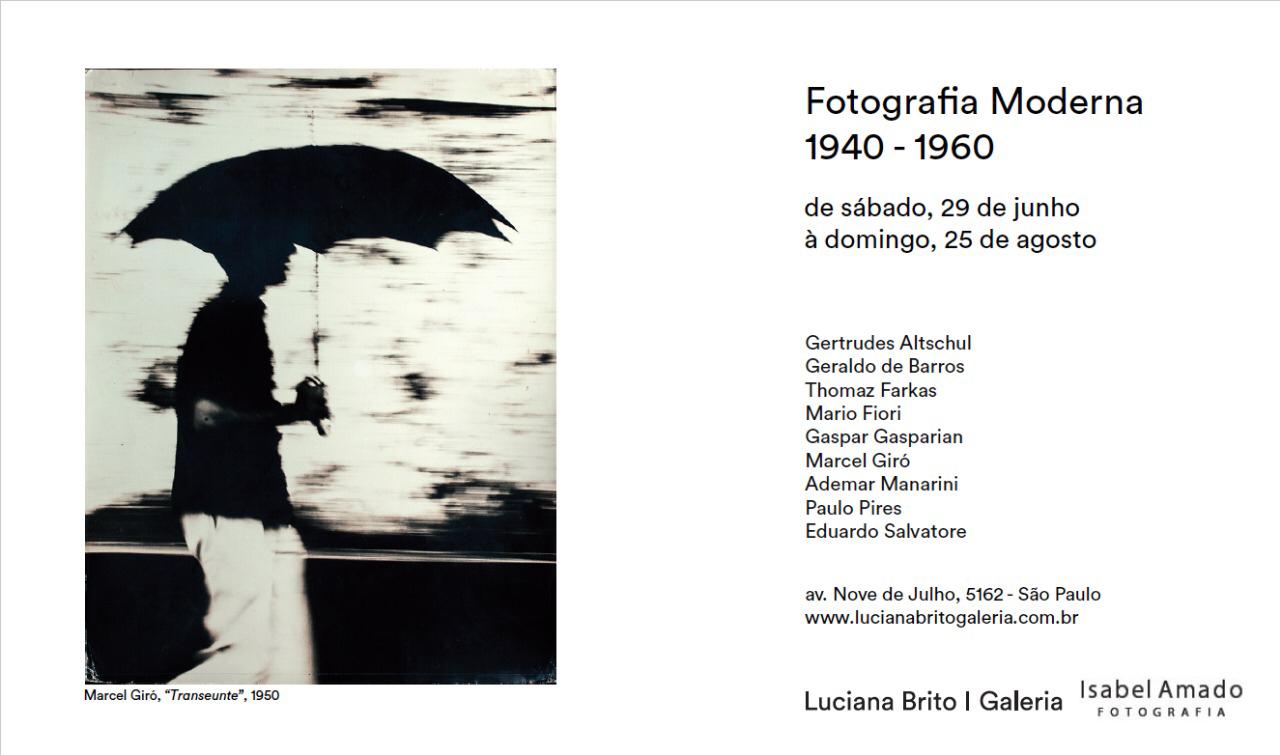 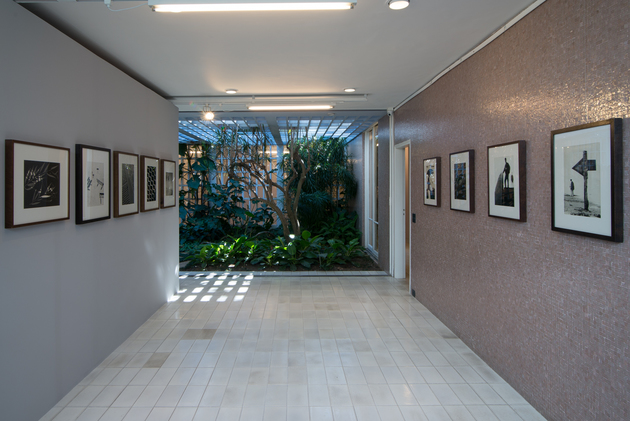