Palmira Puig-Giró (1912-1978) had to wait forever for someone to discover her as a photographer. This someone has been the gallerist Rocío Santa Cruz, who a few years ago began to work on the file of her husband, the Badalonian photographer Marcel Giró (1913-2011), thanks to the trust of his nephew, Toni Ricart Giró. After exposing it, the 2017, remained with doubts. In the background, formed by 4,000 negatives and hundreds of contact sheets, two styles are distinguished, one of more abstract and the other more realistic. But it is that, in addition, in many of the images Marcel Giró appears and, therefore, he could not do them.

She made them, Palmira Puig-Giró, because she was also a photographer. Santa Cruz has unearthed his story and his work, which she exhibits until March 16 at her gallery on the Gran Vía de Barcelona.

How could this author have been so unnoticed? Partly because of the exile that the two undertook after the Civil War. The first to leave, in 1937, was him, first in Colombia, where she would travel some time later. Finally, they settled in Brazil. They had been married by proxy in 1942, but they had known each other since adolescence because the parents were friends. Palmira was born in Tàrrega in a Republican family that after the war was severely repressed.

Emigrating was the only way that the couple found to live their adventure of love and to free themselves from their passion: photography. "They arrived at the right place at the right time. Brazil in the fifties was a country under construction that needed photographers to capture the spirit of its utopia of modernity, "explains Rocío Santa Cruz. The Giró Puig, who in Catalonia had taken cameras and knowledge they had learned in a laboratory of a relative, did not think twice and opened a studio in São Paulo that would become one of the most reputed advertising photography and country fashion.

Marcel was the one who carried the baton, yes. And the role of muse that Palmira exercised in her work is undeniable: "She appears in her architectural images, at the back to give the idea of ​​scale." But, in parallel, Palmira created her work, sometimes with the same camera and the same spool of her husband, which has contributed to so many confusions. "Palmira gives more attention to the figure and its context. She is more poetic. Marcel pulls more towards abstraction, "says the gallerist, who, in order to differentiate the two creative personalities, has ended up locating her signed works, the oldest ones as Palmira Giró and the last ones as Palmira Puig.

The fact she was a complete unknown in Catalonia does not mean that in Brazil she was also unknown. "There, yes, they have always recognized her as a photographer. And he made exhibitions. "The Giró Puig, both, were prominent members of the Foto Cine Clube Bandeirante, which in 2016 the museum of São Paulo recalled in a show. Palmira figured, of course. "For the Moma, which has acquired her work, she is a Brazilian photographer", rivets Santa Cruz.

They took the link again with Catalonia in 1951. They use to come once a year to visit the family. One summer they escaped to Ibiza. From this travel there are some beautiful photographs that were badly cataloged, since they were believed to be from Mexico. It was not until the arrival of democracy that they decided to return definitively. In 1977 they went to receive President Tarradellas (this, like other personal photographs, have come from an album donated by a niece of the photographer). Palmira was already ill with cancer and her body would give up months later. "For Marcel it was a very strong blow and he closed the São Paulo studio." Marcel died almost centennial without being able to see the rescue of his beloved photographer, with her own character. 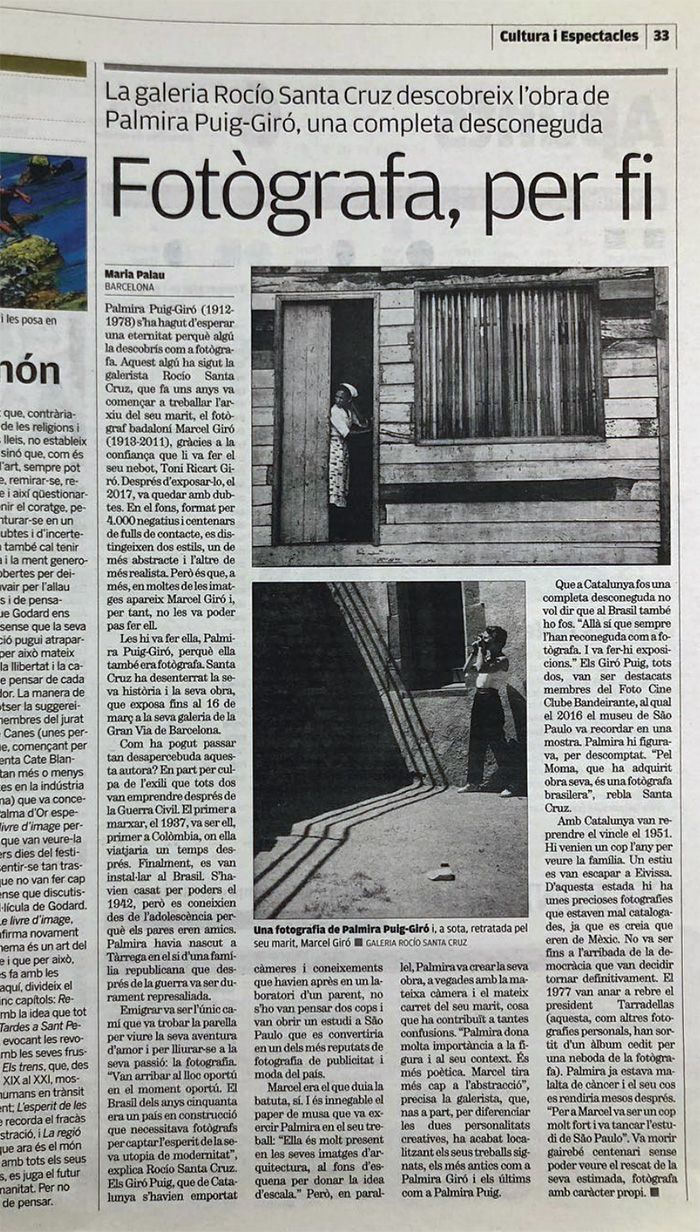